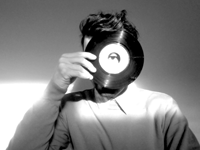 karl salzmann, *1979, is a sound & visual artist, curator and researcher

currently based in vienna / austria.

within process-oriented and experimental setups, he develops and

presents works that study the materiality of sound and its social, cultural

and metaphorical levels of meaning. his artistic activities mainly concern

and topics of (sound) art history.

from the university of applied arts in vienna. he visited the course for computermusik & new media (elak) from 2011-2012(without graduation)

at the university of music and performing arts in vienna and is currently writing on his doctoral thesis at the academy of fine arts in vienna.

from 2014 to 2017 he worked as a lecturer, researcher and artistic/scientific assistant at the department "art&science" - university of applied art in vienna.

in 2013 he founded the festival series klangkunsttage. since 2016 he is - together with thomas wagensommerer and paul gründorfer- running the art space and performance venue zentrale in vienna. aside that he organized and curated various festivals and exhibitions that were connected to sound&art.

his works have been presented (among others) at:

in 2017 he reveiced the erste bank mehrwert kunstpreis which included a residency and exhibition in new york.