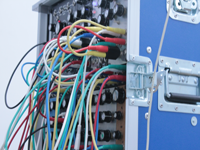 the klangkunsttage were a nomadic festival that temporarily transformed exhibitionspaces into places of performative practice. The aim of the festival was to promote the exchange and presentation of new forms of interaction at the interface of visual art and music and to convey a snapshot of current production.

The festival took place in 2013 and 2014 in cooperation with the exhibition spaces wellwellwell, schleifmühlgasse 12-14 and the vienna art week.

a variety of concerts & performances, a three-day exhibition focusing on transformations of sound, as well as theme-specific lectures and workshops were on display.

informations about klangkunsttage can be found here.